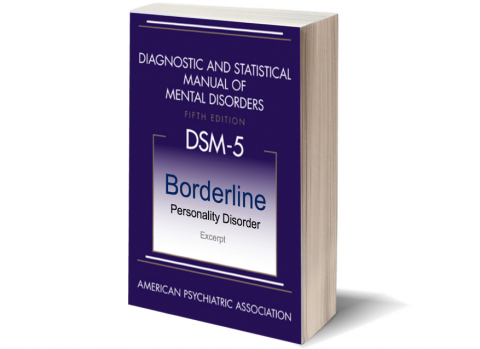 The Diagnostic and Statistical Manual of Mental Disorders (DSM), published by the American Psychiatric Association (APA), offers a common language and standard criteria for the classification of mental disorders. It is used by clinicians, researchers, psychiatric drug regulation agencies, health insurance companies, pharmaceutical companies, the legal system, and policy makers together with alternatives such as the International Statistical Classification of Diseases and Related Health Problems (ICD), produced by the World Health Organization (WHO). The DSM is now in its fifth edition, DSM-5, published on May 18, 2013.

The first section of the definition (i.e., the nine criteria) is widely quoted as the "DSM definition of Borderline Personality Disorder" and this has contributed to the confusion of what the disorder is about. Below is the full excerpt from the May 18, 2013 edition.

A pervasive pattern of instability of interpersonal relationships, self-image, and affects,and marked impulsivity, beginning by early adulthood and present in a variety of contexts, as indicated by five (or more) of the following:

The essential feature of borderline personality disorder is a pervasive pattern of instability of interpersonal relationships, self-image, and affects, and marked impulsivity that begins by early adulthood and is present in a variety of contexts.

Individuals with borderline personality disorder make frantic efforts to avoid real or imagined abandonment (Criterion 1). The perception of impending separation or rejection, or the loss of external structure, can lead to profound changes in self-image, affect, cognition, and behavior. These individuals are very sensitive to environmental circumstances. They experience intense abandonment fears and inappropriate anger even when faced with a realistic time-limited separation or when there are unavoidable changes in plans (e.g., sudden despair in reaction to a clinician's announcing the end of the hour; panic or fury when someone important to them is just a few minutes late or must cancel an appointment). They may believe that this "abandonment" implies they are "bad." These abandonment fears are related to an intolerance of being alone and a need to have other people with them. Their frantic efforts to avoid abandonment may include impulsive actions such as self-mutilating or suicidal behaviors, which are described separately in Criterion 5.

Individuals with borderline personality disorder have a pattern of unstable and intense relationships (Criterion 2). They may idealize potential caregivers or lovers at the first or second meeting, demand to spend a lot of time together, and share the most intimate details early in a relationship. However, they may switch quickly from idealizing other people to devaluing them, feeling that the other person does not care enough, does not give enough, or is not "there" enough. These individuals can empathize with and nurture other people, but only with the expectation that the other person will "be there" in return to meet their own needs on demand. These individuals are prone to sudden and dramatic shifts in their view of others, who may alternatively be seen as beneficent supports or as cruelly punitive. Such shifts often reflect disillusionment with a caregiver whose nurturing qualities had been idealized or whose rejection or abandonment is expected.

There may be an identity disturbance characterized by markedly and persistently unstable self-image or sense of self (Criterion 3). There are sudden and dramatic shifts in self-image, characterized by shifting goals, values, and vocational aspirations. There may be sudden changes in opinions and plans about career, sexual identity, values, and types of friends. These individuals may suddenly change from the role of a needy supplicant for help to that of a righteous avenger of past mistreatment. Although they usually have a self-image that is based on being bad or evil, individuals with this disorder may at times have feelings that they do not exist at all. Such experiences usually occur in situations in which the individual feels a lack of a meaningful relationship, nurturing, and support. These individuals may show worse performance in unstructured work or school situations.

Individuals with borderline personality disorder display impulsivity in at least two areas that are potentially self-damaging (Criterion 4). They may gamble, spend money irresponsibly, binge eat, abuse substances, engage in unsafe sex, or drive recklessly. Individuals with this disorder display recurrent suicidal behavior, gestures, or threats, or self-mutilating behavior (Criterion 5). Completed suicide occurs in 8%-10% of such individuals, and self-mutilative acts (e.g., cutting or burning) and suicide threats and attempts are very common. Recurrent suicidality is often the reason that these individuals present for help. These self-destructive acts are usually precipitated by threats of separation or rejection or by expectations that the individual assumes increased responsibility. Self-mutilation may occur during dissociative experiences and often brings relief by reaffirming the ability to feel or by expiating the individual's sense of being evil.

Individuals with borderline personality disorder may display affective instability that is due to a marked reactivity of mood (e.g., intense episodic dysphoria, irritability, or anxiety usually lasting a few hours and only rarely more than a few days) (Criterion 6).

The basic dysphoric mood of those with borderline personality disorder is often disrupted by periods of anger, panic, or despair and is rarely relieved by periods of well-being or satisfaction. These episodes may reflect the individual's extreme reactivity to interpersonal stresses. Individuals with borderline personality disorder may be troubled by chronic feelings of emptiness (Criterion 7).

Easily bored, they may constantly seek something to do. Individuals with this disorder frequently express inappropriate, intense anger or have difficulty controlling their anger (Criterion 8). They may display extreme sarcasm, enduring bitterness, or verbal outbursts. The anger is often elicited when a caregiver or lover is seen as neglectful, withholding, uncaring, or abandoning.

Such expressions of anger are often followed by shame and guilt and contribute to the feeling they have of being evil. During periods of extreme stress, transient paranoid ideation or dissociative symptoms (e.g., depersonalization) may occur (Criterion 9), but these are generally of insufficient severity or duration to warrant an additional diagnosis. These episodes occur most frequently in response to a real or imagined abandonment. Symptoms tend to be transient, lasting minutes or hours. The real or perceived return of the caregiver's nurturance may result in a remission of symptoms.

Individuals with borderline personality disorder may have a pattern of undermining themselves at the moment a goal is about to be realized (e.g., dropping out of school just before graduation; regressing severely after a discussion of how well therapy is going; destroying a good relationship just when it is clear that the relationship could last). Some individuals develop psychotic-like symptoms (e.g., hallucinations, body-image distortions, ideas of reference, hypnagogic phenomena) during times of stress. Individuals with this disorder may feel more secure with transitional objects (i.e., a pet or inanimate possession) than in interpersonal relationships. Premature death from suicide may occur in individuals with this disorder, especially in those with co-occurring depressive disorders or substance use disorders. Physical handicaps may result from self-inflicted abuse behaviors or failed suicide attempts. Recurrent job losses, interrupted education, and separation or divorce are common. Physical and sexual abuse, neglect, hostile conflict, and early parental loss are more common in the childhood histories of those with borderline personality disorder.

There is considerable variability in the course of borderline personalty disorder. The most common pattern is one of chronic instability in early adulthood, with episodes of serious affective and impulsive dyscontrol and high levels of use of health and mental health resources. The impairment from the disorder and the risk of suicide are greatest in the young-adult years and gradually wane with advancing age. Although the tendency toward intense emotions, impulsivity, and intensity in relationships is often lifelong, individuals who engage in therapeutic intervention often show improvement beginning sometime during the first year. During their 30s and 40s, the majority of individuals with this disorder attain greater stability in their relationships and vocational functioning. Follow-up studies of individuals identified through outpatient mental health clinics indicate that after about 10 years, as many as half of the individuals no longer have a pattern of behavior that meets full criteria for borderline personality disorder.

Genetic and physiological. Borderline personality disorder is about five times more common among first-degree biological relatives of those with the disorder than in the general population. There is also an increased familial risk for substance use disorders, antisocial personality disorder, and depressive or bipolar disorders.

The pattern of behavior seen in borderline personality disorder has been identified in many settings around the world. Adolescents and young adults with identity problems (especially when accompanied by substance use) may transiently display behaviors that misleadingly give the impression of borderline personality disorder. Such situations are characterized by emotional instability, "existential" dilemmas, uncertainty, anxiety-provoking choices, conflicts about sexual orientation, and competing social pressures to decide on careers.

Borderline personality disorder is diagnosed predominantly (about 75%) in females.

Substance use disorders. Borderline personality disorder must also be distinguished from symptoms that may develop in association with persistent substance use.

Identity problems. Borderline personality disorder should be distinguished from an identity problem, which is reserved for identity concerns related to a developmental phase (e.g., adolescence) and does not qualify as a mental disorder.